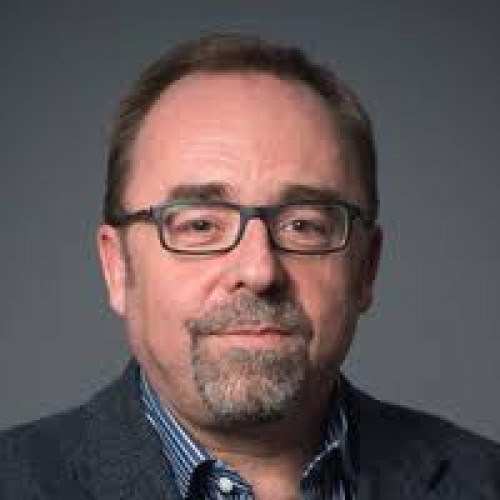 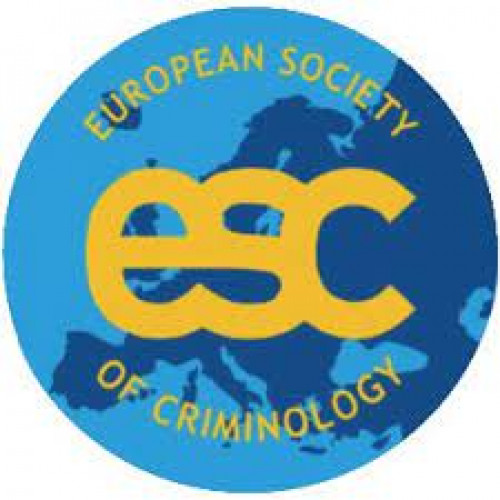 In 2021, the European Society of Criminology (ESC) had 543 members, and 461 of them took place in the 21th Annual Meeting of the ESC, organized online from 8 to 10 September with the collaboration of the ESC Working Groups. Four different awards were presented during the conference. Loraine Gelsthorpe received the 2021 European Criminology Award; Janna Verbruggen, Arjan Blokland, Amanda L Robinson and Christopher D Maxwell received the European Journal of Criminology Best Article of the Year 2020 Award; Anita Lavorgna received the 2021 ESC Early Career Award; and Fergus McNeill received the 2021 ESC Book Award. Through an electronic voting, the ESC members appointed Klaus Boers as President-Elect, Barbora Hola as At-large Board member, and Uberto Gatti as Auditor. At the end of the conference, Catrien Bijleveld took office as President of the ESC, replacing Aleksandras Dobryninas until the end of the next conference.

For the second consecutive year, the COVID-19 pandemic forced the ESC Board to organize the 21st Annual Meeting of the ESC online. The conference took place from 8 to 10 September 2021 and the ESC Board decided to apply reduced registration fees and to held it through a professional virtual platform. As it can be seen in Figure 1 —which shows trends in the number of ESC members and conference participants from 2004 to 2021—, the 2021 e-conference was followed by 901 criminologists. This is 55% more than the number of participants in the 2020 e-conference, although is still much lower than the figures observed from 2013 to 2019, when the number of participants oscillated between 1,000 and 1,400 participants. Twenty-five percent of the participants were students.

In terms of affiliation, in 2021 the ESC had 1099 members, which is exactly the same number it had in 2014. In fact, Figure 1 suggests that, while the pandemic had a strong negative effect on the number of conference participants, its impact on the number of members was relatively mild. From 2013 onwards, the latter is over 1,000, although punctually it is clearly driven upwards by the most successful conference in terms of participants (Ghent 2019 and Porto 2015). In addition, twenty-two percent of the 2021 ESC members were students, a percentage that remains relatively stable since the 2010s.

Finally, taking into account that 24% of the participants in the Conference were not members of the ESC, we can conclude that in 2021 there were 1314 criminologists linked to the ESC in one way or another (1099 members and 215 non-members that attended the conference).

Figure 1. Participants in the ESC Annual Meetings and members of the ESC from 2004 to 2021 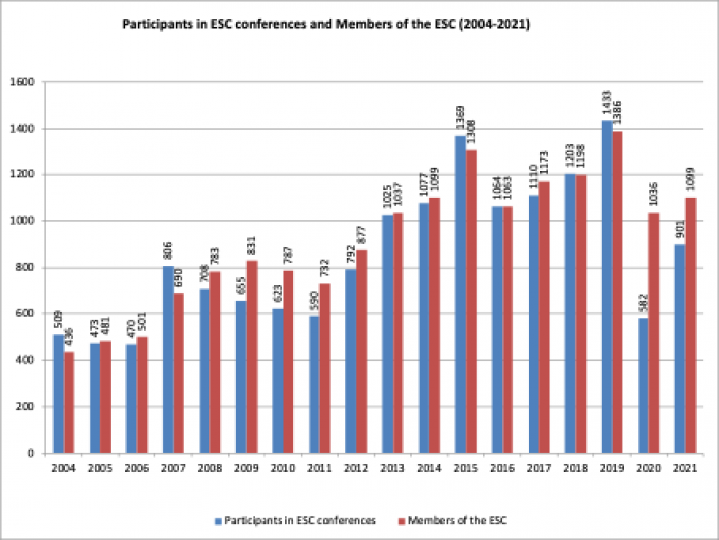 The authors of this report take this opportunity to thank the members of the ESC Executive Board for their engagement during another difficult year, full of virtual meetings. We also thank Csaba Györy (Eotvos Loránd University (ELTE) and Hungarian Academy of Sciences, Budapest, Hungary) and Dorel Herinean (University of Bucharest, Romania), who acted as conference organizers, as well as the Heads of the 34 ESC Working Groups, who acted as peer-reviewers and put together the sessions of their thematic areas. Without them, the 2021 e-conference would have been impossible to organize.

In 2021, Kyle Treiber (University of Cambridge, UK) took office as Editor-in-Chief of the European Journal of Criminology, replacing Dario Melossi (University of Bologna, Italy), who occupied that position from 2017 to 2020. The Board thanks both of them for their engagement and is happy to announce that an agreement was reached with SAGE to increase the number of pages of the journal.

In 2021, the ESC delivered four awards. The Awards Ceremony took place during the 2021 ESC e-conference, and the acceptance speeches of Loraine Gelsthorpe (2021 European Criminology Award) and Anita Lavorgna (2021 ESC Early Career Award) are published in issue 2021/3 of the Newsletter of the ESC, Criminology in Europe.

Loraine Gelsthorpe, Professor of Criminology and Criminal Justice at the University of Cambridge, United Kingdom, received the 2021 ESC European Criminology Award in recognition of her lifetime contribution to criminology.

The award committee —composed by former ESC presidents Gorazd Meško (Chair, University of Maribor, Slovenia), Tom Vander Beken (University of Ghent) and Lesley McAra (University of Edinburgh)— considered that Loraine Gelsthorpe “has researched, written and published on many topics within criminology and criminal justice —from prosecutorial and judicial discretion in the criminal justice system, to community sanctions, the criminalisation of migrants, human trafficking, and youth justice, to research ethics in criminology. Most recently she has been engaged in work on deaths under community supervision, an important and under-researched topic. She is perhaps most well-known however for her work on the links between criminal justice and social justice, and the punishment of women. Her impact on public policy has been significant and she has been a member of many important advisory groups. Professor Loraine Gelsthorpe has been a member of the ESC since 2002 and initiated the ESC Working Group on Gender, Crime and Justice in 2010. She has co-chaired that Group ever since, organising panels at each ESC annual conference and mentoring early career colleagues, throughout each year, tirelessly providing support and feedback on their work and strengthening cooperation and networks among European scholars. The esteem in which her scholarship and leadership is held, was evidenced through her election as President of the British Society of Criminology (2011-2015).”

Janna Verbruggen, Arjan Blokland, Amanda L Robinson and Christopher D Maxwell received the European Journal of Criminology Best Article of the Year 2020 Award in recognition of their article “The relationship between criminal behaviour over the life-course and intimate partner violence perpetration in later life”, published in issue 17/6 (pp 784-805) of the European Journal of Criminology (EJC).

The award committee, composed by Aleksandras Dobryninas (Chair, University of Vilnius and ESC President), Steve van de Weijer (NSCR and co-winner of the Award in 2020) and Kyle Treiber (University of Cambridge and EJC Editor-in-Chief) “agreed with the Editorial Board members who nominated this article that its high-quality contribution to fundamental criminological science through the meticulous analysis of robust data, including both official and self-reported components, established it as a strong contender for the prize. In particular, the jury highlighted the theoretical, methodological, and analytical strengths of the paper, which together substantiate its contribution to European criminology on multiple fronts. Verbruggen et al. (2020) situate their research design and analysis against a backdrop of various theoretical perspectives, insightfully distinguishing those that argue that IPV is a unique form of violence implicated in specific contexts and associated with particular personal characteristics and vulnerabilities, from those that argue IPV is a manifestation of the same causal factors, personal or situational, which drive criminal behaviour more generally, including other forms of violence. In finding support for the latter, they contribute meaningfully to the endeavour to explain the causes of IPV, with implications for how we may prevent it. They also provide an important cross-cultural validation of previous research findings, suggesting that these findings have broad applicability. The authors utilize an innovative analytical approach which combines predictive and trajectory-based modelling to examine patterns of criminal behaviour over time, while also exploring factors that predict and may be predicted by those patterns. The data used comes from the Criminal Career and Life-Course Study (CCLS), a rich data source containing both official and self-reported data. It is not without its limitations, but the jury notes that the authors have critically examined these limitations and addressed their impact on the findings, which despite these limitations are clear. As the authors summarize: ‘For the majority of IPV perpetrators in this study, their abusive behaviour was not unique to the relationship context but part of a broader pattern of criminal behaviour’. Overall, the jury felt that this paper is exemplary of fundamental criminological enquiry, contributing to criminological theory testing, analytical methods, and knowledge about the fundamental nature of crime and its causes, as well as specifically intimate partner violence.”

The award committee, composed by Éva Inzelt (Chair, Etvos Lorand University, ELTE, Budapest, Hungary), Effi Lambropoulou (Panteion University of Social and Political Sciences, Athens, Greece) and José Becerra-Muñoz (University of Malaga, Spain) was “fully convinced of Anita Lavorgna’s outstanding scientific achievement and unanimous in its decision to grant her the Early Career Award.” Anita Lavorgna has enjoyed research positions at Rutgers University (Newark, New Jersey, USA), the University College London, Jill Dando Institute, (2012), the VU University in the Netherlands (2013), and the University of Wolverhampton, UK (2014) before getting her Ph.D. in 2014 and joining the University of Southampton, UK, in 2015, where she was promoted to associate professor in 2019. By March 2021 she had published 35 academic peer-reviewed journal articles, 20 peer-reviewed book chapters, one textbook on cybercrimes, one book on information pollution, one co-authored book and two books as co-editor, as well as several reports. She has participated in numerous international conferences and has been invited to give talks and key note speeches in several events. Her work has also received attention by non-academic stakeholders and international newspapers. In January 2021, she was appointed as the Co-Editor-in-Chief of Criminology & Criminal Justice, the official journal of the British Society of Criminology.

The acceptance speech of Anita Lavorgna is published in issue 2021/3 of the Newsletter of the ESC, Criminology in Europe.

Fergus McNeill, Professor of Criminology and Social Work at the University of Glasgow, was awarded the 2021 ESC Book Award in recognition of his book Pervasive Punishment: Making Sense of Mass Supervision, published in 2018 by Emerald Publishing Limited.

The award committee, composed by Catrien Bijleveld (Chair, NSCR and Vrije Universiteit Amsterdam, Netherlands), José Ángel Brandariz (University of A Coruña, Spain), and Dirk Van Zyl Smit (University of Nottingham, United Kingdom, and co-winner of 2020 ESC Book Award) considered that “Particularly well written, McNeill’s book articulates a vibrant narrative and embraces a much appealing methodology in dissecting its main topic of study, community sanctions and penal supervision in Scotland. In his narrative proposal, McNeill assembles a relatively standard scholarly exploration together with semi-fictional stories and music creations. By focusing directly on individuals subject to such supervision, McNeill develops a full picture of the pains of supervision that go far beyond the interaction of supervisees with those responsible for their supervision. By involving the supervisees in various imaginative ways, McNeill gets them to portray vividly their fears and their hopes, allowing him to present a rich picture of their often-fractured lives. The second strand in McNeil’s analysis is his nuanced focus on the role of probation workers whose interactions with their supervisees are influenced by the very different, ideologically driven approaches to their occupational roles. He portrays these workers through ‘short story’-sections which introduce each substantive chapter of the book. This extraordinary device succeeds in portraying the varying dilemmas that such workers face and explains the hard choices that they have to make, both personally and professionally. In contrast to its apparent, relatively localised subject, the aspirations and breadth of Pervasive Punishment go far beyond noncustodial penality in Scotland. McNeill manages to bring into his book the insights stemming from the cross-national conversations on community sanctions he has long energised, both across Europe and elsewhere. In addition, the book’s theoretical framework makes a significant contribution to update criminological knowledge on penal supervision. These and other aspects make Pervasive Punishment a critical milestone of twenty-first century penology.”

For the second consecutive year, ESC members were able to vote through a system of electronic voting implemented with the collaboration of the University of Lausanne. They appointed Klaus Boers as President-Elect, Barbora Hola as At-large Board member, and Uberto Gatti as Auditor. The president of the ESC is elected for a three-year term (the first year as president-elect, the second one as president, and the third one as past-president), the At-large Board members are elected for three years, and the Auditors for two years. All the terms start at the conclusion of the Annual Meeting of the year in which the election takes place (2021 in this case).

Back to in-person conferences (at last!)

In the meantime, you can visit the ESC website, http://esc-eurocrim.org/, follow us on Facebook (https://www.facebook.com/groups/110696536816) and Twitter @esc_eurocrim (https://twitter.com/esc_eurocrim), and watch the YouTube channel of the ESC (https://www.youtube.com/channel/UCommPTU1z27MXC9rFlkCz6w), where you can access the interviews conducted in the framework of the European Criminology Oral History Project (ECOH), launched by Rossella Selmini and currently under the responsibility of José Angel Brandariz.